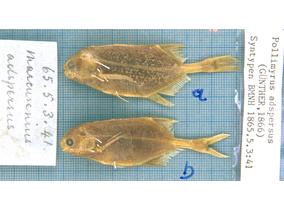 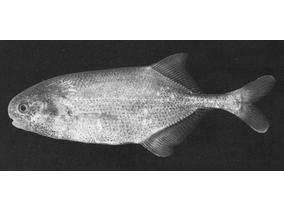 Snout compressed, short, elevated, subtruncated in front, the cleft of the mouth being at its lower side but before the vertical from the front margin of the eye. Eye small, as long as the snout. Teeth small, dilated, and notched, forming a complete series round the margin of both jaws. The origin of the dorsal fin is a little nearer to the root of the caudal than to the occiput. The pectoral extends beyond the extremity of the ventral, which is very small, only half as long as the head. The height of the body is contained thrice in the total length (without caudal), the length of the head four times and one-third. Light brownish, dotted all over with brown, the dots being largest and most numerous on the head, thorax, and on the vertical fins.